Like many operators Ribble embraced the 36 foot saloon when such vehicles became legal on the road from 1962. For almost the first time Ribble chose a BET standard design instead of their own or a manufacturer standard. Between 1963 and 1967 190 similar looking buses of this type entered the fleet. Marshall bodied the majority but 60 had Weymann bodies. It is understood that Ribble had significant input to the design, notably to rear window style. Earlier examples had synchromesh gearboxes while later ones had semi automatic air boxes. There were also 55 similar looking buses of a shorter length with PSU4 chassis. Finally, Ribble also bought many dual purpose vehicles with the same body shell – see our 811

Delivered in overall red they soon became a familiar sight throughout Ribble territory. Many replaced double deckers, especially 53 seat low bridge types which had the same number of seats. They were particularly useful to the operating department in the summer when used a reliefs to express services, being a considerable improvement on low bridge PD2s in this respect. Conversely they were hard going on twisty country roads in rural areas.

465 entered service in June 1963 and was allocated to Blackburn’s George Street garage where it stayed until 1970. By January that year it was at Southport before moving to Preston in mid 1975. By March 1977 it was at Skerton (Lancaster) depot where it remained. It was converted to act as a tow bus and that ensured its longevity being finally withdrawn in 1982. That was not the end of its association with Lancaster as it was acquired for towing by Lonsdale PSV Sales. After another 10 years it joined the RVPT collection.

Although safely stored undercover it was not on the short term list for restoration. In early 2015 RVPT member John Davis from the Isle of Man offered to take it and fully restore it. John already owns 665, a short Leopard. The Trust has accepted this offer and the bus has now moved to the island for restoration. 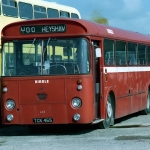 465 when with Lonsdale PSV as a tow bus 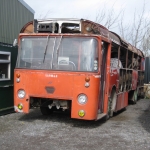