There are two Ribble AN68 model Atlanteans in our collection. ECW bodied 1481 has been with us since 2001 but has been resting for the past five years. It has recently been given a thorough service and this week passed its MoT which will allow it to rejoin the active fleet.

1397 is a Park Royal bodied example which has been undergoing a major rebuild and which is now entering its final stage. This week the headlights were wired in allowing the front panel to be fitted. More work needs to be done but it is expected to be on the road this year.

Plenty of other work is going on including 1349 having its cab emptied of the driver seat, autolube tank and control panel to allow rebuilding of the structure behind the cab. 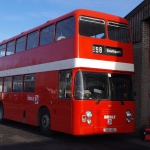 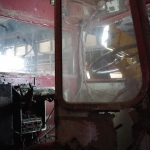