Steady progress with two of our restoration projects. Recent work on PD2 1467 has focused on the platform doors. These are sliding, over-lapping doors driven by an electric motor and a chain. It seems they were a nightmare back in Ribble days and they have certainly proved difficult to set up. However they have now been fitted and tested under power. Subsequently they have been removed for initial painting as once fitted it won’t be possible to get a paint brush into the corners. Royal Tiger 377 has taken another step forward with the fitting of front panels. This was a painstaking job as the cut outs for the head and side lights had to be done very precisely to allow the Ribble fleet name to be placed centrally. The next step will be securing the front window pans which have already been dry fitted.

Cheetah 1568 is now part of the operational fleet. However its recent outing to Morecambe produced a new fault. After getting from our depot to Morecambe in the morning with no problems it developed a fault with gear selection when doing an outing to Overton. We suspect the issue is with the clutch and this will be investigated now that it’s up on the Hywemas. 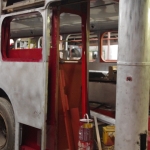 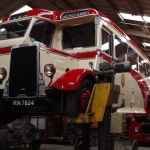 1568 in position for clutch examination 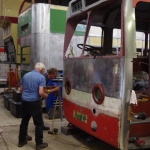 Front panels being secured on 377