Home/Latest News/Display in Preston
Previous Next

Saturday July 20th saw the “Big Bus Bash” in front of the Harris Museum in Preston. This was the first of a series of events to mark the 50th anniversary of Preston’s well known bus station. It was organised by the Harris and featured three bus companies which used the bus station when it opened – Ribble, Fishwick and Preston. Ribble was represented by a 1961 Leyland Leopard / Harrington Cavalier touring coach. From Fishwick were a 1958 Leyland PD2 with a lowbridge Weymann body and a late model Leyland Tiger Cub with a locally built Fowler body. Representing Preston’s buses was a 1969 Leyland Panther with a MCW body and a Dennis Trident / East Lancs currently in service with Preston Bus. The display ran from noon to about 16.00 and attracted numerous visitors including many young children who were intrigued by the design of older buses.

The Harris Museum is housed in a superb late Victorian building which has a grade 1 heritage listing, well worth a visit. A future event will be held at the bus station on Saturday, October 19th with many attractions including a selection of vintage buses. 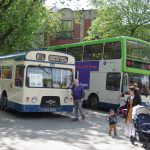 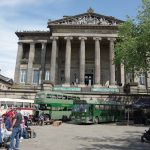 The museum dominates the Flag Market 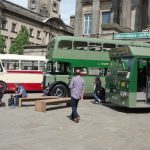