National 831 was used to support a film being made about the development of Pacer units for the railway and the related Leyland National bus. The filming took place on Merseyside and featured Nick Hewer, best known for his role in The Apprentice. Below we see him on the steps of 831 and also the bus being moved towards the film crew. 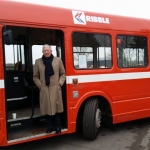 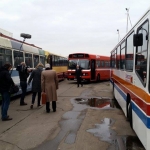