Further developments with the three buses mentioned in the previous Blog.

After 2057 (TD5 / Alexander lowbridge) had a successful initial outing it got a much longer run which went well. However, the starter motor wasn’t engaging properly so we removed it and replaced it with a spare. That solved the problem but also showed the batteries were well past their best so two new ones were bought. The defective starter motor has been sent to a specialist company for repair and refurbishment. Should you be wondering what a starter motor looks like a picture is attached.

We’ve known for some time that PD3 1775 had a poorly engine and over the past week it has been removed for evaluation. It seems likely it needs a full strip down and repair but fortunately a replacement was to hand. This was previously in 1793 which we dismantled for spares some years ago. Although 1793 had lived in the long grass for many years the engine was found to be in good condition. With a few minor repairs it ran well so has been fitted to 1775. We will do a certain amount of running in the yard and then take it for a test run once we’re sure it’s bedded in ok. All being well both 1775 and 2057 will be available for service this summer – assuming we can use them.

Restoration project 1467 (PD2 / Burlingham) has also made progress. Completion of the electrical work has cleared the way for work to resume in the cab area. The offside front wing is now fitted and the cab floor will be in place in the near future. The dreaded Southlancs doors gave more trouble so the door motor was removed for a good clean up. A picture of this historic artefact is attached. The project is nearing completion but inevitably there will be a certain amount of ‘snagging’ to be done before it can be road tested. 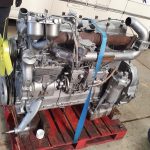 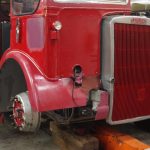 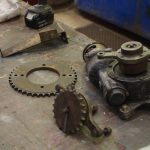 Door motor for 1467 stripped down