Once again RVPT supported a number of museums in Preston who organised special events for the half term holiday. Our free circular service linked the Ribble Steam Railway, health Infantry Museum, Museum of Lancashire and the Harris Museum, running every 30 minutes. An innovation this year was an hourly route to Leyland to link to the South Ribble Museum. Some RVPT members own non-Ribble buses and we used some on the service. A Fishwick PD2 was an obvious choice for the Leyland route and it was supported by a Blackpool PD3. The public perception of a vintage bus is a half cab with rear entrance so these fit the bill. The Preston route used Ribble 1481, 2101 and 831 supported by RML 2716, something different for Preston.

The previous days had been bright but Thursday was mainly wet. Despite that over 2300 journeys were recorded and it’s pleasing to say the day went smoothly. A good example of heritage groups working in support of each other. 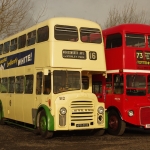 Blackpool 512 basks in sunlight – before the day 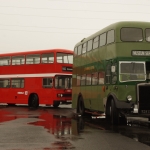 Fishwick 5 at the railway before departing for Leyland. 2101 waits its turn for the round city service 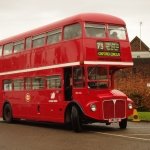 RML 2716 at the Museum of Lancashire – still raining!