Plenty going on in the depot now that the ‘season’ is over. We have four active restoration projects, Royal Tiger 377, early Leyland National 382, Stagecoach B10M / Plaxton coach 114 and Morecambe AEC 72. 377 is well advanced with the finishing touches applied to the interior. Most work is now focussed on the cab area where floor strips have been fitted to the steps and entrance and preparation work is underway for fitting the doors and driver window. Work started only recently on 382 but is making rapid progress with most nearside panels removed and in many cases replaced; new skirt panels have also been fitted.The engine and gearbox have been removed for assessment and where necessary for refurbishment. Both appear to be sound. The pod equipment is also being refurbished.

Morecambe & Heysham Regent 111 no.72 is also entering the final stages of restoration. Seat frames have recently arrived back from stripping and powder coating and are now being fitted. The seat cushions have already been restored with new moquette and will be fitted later. Upstairs front windows have now been installed. B10M 114 is having its rear suspension replaced with new top plates and air bags.

As well as restorations repairs are underway on ‘Tank’ 1775 and open top VR 1995. The former had an engine transplant earlier this year and has required further remedial work. This is now almost complete. Over the winter new rexine will be fitted to the lower saloon seat backs (upstairs were done earlier). 1995 suffered a major gearbox failure when attending the Barrow Transport Festival in July. The gearbox has now been sent to a specialist company for repair. All this plus routine servicing of the fleet; never a dull moment. 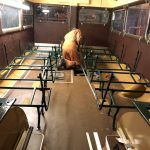 Seats being fitted in Morecambe 72 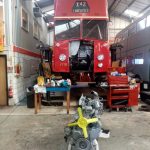 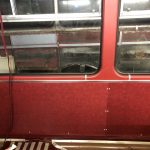 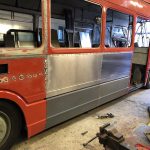 National 382 with new side panels