Preston bus station was opened on the 12th of October 1969 and its 50th birthday was celebrated by a series of events on Saturday, 19th October. Both loved and loathed the bus station and associated car park has been the subject of various plans over the years including possible demolition. It has now been renovated and one side no longer used by buses is now an open public space. This was used for a small display of buses as well as a music tent and various play areas for children. Like all good birthday parties there was a cake as well as other snacks.

The Harris Museum has an exhibition about the bus station which is on until November 24th and is well worth a visit. RVPT supported the day by providing two buses for display and one for a short service to the Harris. Our friends brought a Fishwick National and a Preston Panther so the three main users of the bus station were represented. The service carried quite a few passengers despite the short distance covered.

Fishwick National 24 and our 1686 on service 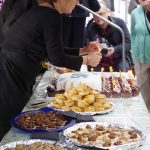 Candles being lit on the birthday cake