Our buses have been to events organised on successive weekends by the Manchester Museum of Transport and Merseyside Transport Trust. The long established Heaton Park gathering in Manchester was attended by Cavalier 1036 and Atlantean 1397,  the latter making only its second public appearance. Both were on display all day along with numerous other buses from Lancashire and beyond.

The following Sunday in Liverpool was also sunny. 1397 was again used but this time ran in service from South Parkway to Mann Island at the Pier Head. Also working on the same service were National 831 and Tiger / Duple saloon 900. The service was well supported with good loads all day and our buses performed well. NBC era poppy red Ribble buses along with Merseyside PTE era green ones evoked strong memories of the 1970s and early 1980s. 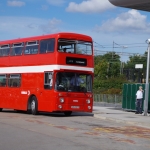 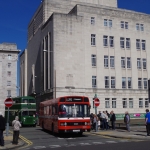 831 pulls away from the stop at Mann Island dwarfed by the imposing buildings near Pier Head. 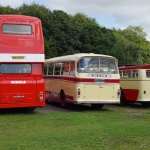