The RVPT team has been active in the depot despite also taking our buses out to events. Royal Tiger 377 made a step forward with the fitting of its nearside luggage rack. Before it could be installed cove panels and roof brackets had to be fitted. Both luggage racks have been extensively rebuilt after being removed from donor bus 386. When 377 was rebuilt by Ribble for the Leonard Cheshire Home its racks were removed. Good progress is also being made with the bodywork on lowbridge PD2 1349. A significant amount of the offside has now been fitted with new panels and some of the side moulding attached.

The operational fleet also requires constant attention. Cheetah 1568 experienced engine problems at our Morecambe event and had to return on a low loader. The problem was traced to the magneto which has now been fixed and the opportunity was also taken to adjust the tappets and spark plugs and clean out the air filter. A test drive went well so hopefully it will now be in action at Lytham Hall on August 26th. Our oldest bus, Lion 1161, also needed an outing so local residents were treated to the sight of these veterans running together. 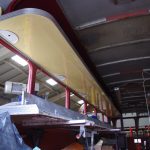 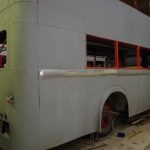 1349’s offside panels plus some of the moulding 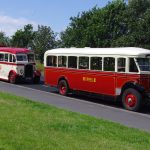