Home/Latest News/Ribble 100 at Morecambe
Previous Next

Our big day celebrating Ribble’s centenary took place on Sunday, May 26th. Based at Morecambe football club’s  Globe Arena and on the promenade the event attracted many visiting vintage buses and numerous members of the public. The day began with heavy rain but soon dried up to an acceptable level. Many buses were on display at both sites and frequent free bus services were operated. A number of special guests attended the opening event at the Globe Arena including local MP Cat Smith and recently elected mayor David Whitaker. Roger Davies was in attendance to sign copies of his new book on Ribble

This short blog can only provide a very brief summary of the day but numerous photos have been posted on Facebook and elsewhere. Some preserved buses rarely seen in our area were present including the remarkable Vulcan which once operated for Dallam Motors who were taken over by Ribble in 1950. PD3 1729 has been resident in the British Commercial Vehicle Museum at Leyland for many years and was used for a couple of trips from the ground to the Winter Gardens.

RVPT would like to thank all the vehicle owners who came to our event, some from long distances, and all members of the public who helped to make it an enjoyable day. 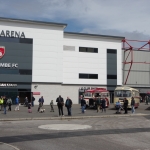 Some of our buses at the Globe Arena 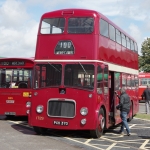 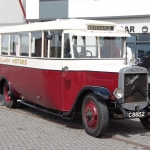 A very rare survivor once based in Milnthorpe