As Stagecoach expanded to a national level in the late 1980s / 1990s they adopted a number of vehicle designs as group standards. Substantial numbers of coaches with Plaxton Premiere bodies were purchased. Some were Dennis Javelins but the majority were Volvo B10Ms. One of these has now been added to the RVPT collection and is undergoing restoration.

P109 DCW was new to Stagecoach Ribble’s Preston depot in June 1997 as its 109 to be used on a number of interurban express services:-

Later it was transferred to Stagecoach Cumbria’s Carlisle depot and used on the 685 service to Newcastle, by this time numbered into the national scheme as 52409.  In 2016 it moved to Stagecoach Bluebird at Aberdeen for the East Coast Rider service X7: Aberdeen – Montrose – Stonehaven. After withdrawal from Stagecoach it was bought by Howards Travel of Warrington. It was acquired for preservation in February 2019.

Since joining the Trust collection a significant amount of remedial work has been done on the bodywork which was in poor condition. Several progress reports have been given on our Blog. In 2020 another member of the class P114 DCW was acquired as a source of spares. Restoration is underway to return 109 to its 1997 condition. 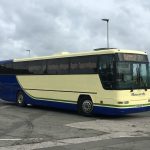 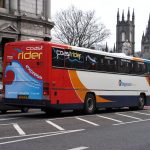 In Aberdeen with Bluebird

On the 685 service in Carlisle 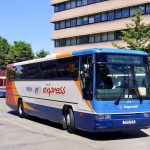 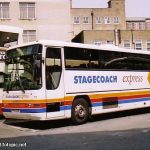 109 in Liverpool in original condition