London Bus Museum organised an event to mark the 50th anniversary of the end of bus and coach building at Weymann and Harrington. RVPT took Leopard DP 811 which has a Weymann body and having been built in 1965 it was one of the youngest on display. The Brooklands site is huge and many buses were on display as well as aircraft, cars, bikes etc. The sun shone most of the day and 811 received many visitors. Pleased to report that 811 covered the 600 plus miles over the weekend faultlessly and gave people a chance to see a Ribble bus in a different location.

We were given a prime position close to the entrance with an East Kent Reliance as a companion. The elevated photo gives some idea of the size of the site but even this represents only about a quarter of the space used for the event. Finally it’s only right to show some London buses at the home of the London Bus Museum so here are some green RTs basking in the sun. 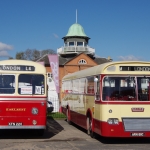 811 at the entrance of the site 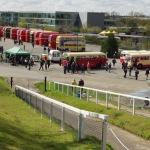 Overview of part of the site 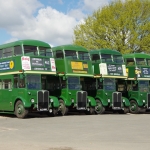