Although Ribble built up a sizeable fleet of RE buses the preferred chassis for coaches remained the Leyland Leopard. However, in 1972 ten REs with ECW coach bodies were acquired. These were numbered 1012-1021 and they were delivered in National white coach livery. This particular model used Plaxton Elite front and rear screens which made them look quite different from earlier ECW coaches. In 1977 1019 was altered to 47 seats with the installation of a luggage pen and it was repainted into NBC dual purpose livery – poppy red to waist rail, white above.

In 1982 1019 along with 5 others was sold to Crosville where it became ERL 526. When that company was divided at privatisation it went into Crosville Wales. It was subsequently sold to Northern Bus, a keen user of REs, who later sold it to Hastings & District. Its final operator was Wightax on the Isle of Wight. Upon withdrawal, it was acquired by the RE Group at Hastings before being acquired by a RVPT member in 2005. It is now undergoing restoration in our depot and the plan is to restore it in the DP livery as a 47 seater. 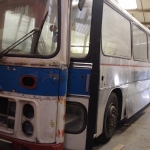 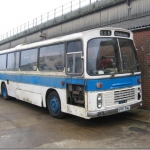 At Hastings about to leave for a new life with RVPT